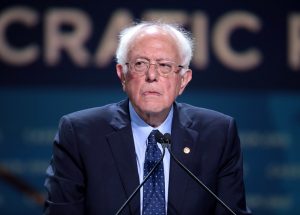 EXECUTIVE SUMMARY: Unpacking Senator Bernie Sanders’s announcement that he will not attend the annual AIPAC Policy Conference because the organization provides a “platform” for “leaders who express bigotry and oppose basic Palestinian rights” reveals a gambit to split American Jews not only from AIPAC but from Israel. Accusing Israeli leaders and voters of being “right wing” and “racist” sets the stage for other Democratic candidates and American Jews to chance being labeled as the same.

Leading US Democratic presidential candidate Senator Bernie Sanders has announced that he will not attend the 2020 AIPAC policy conference, saying, “The Israeli people have the right to live in peace and security. So do the Palestinian people. I remain concerned about the platform AIPAC provides for leaders who express bigotry and oppose basic Palestinian rights. For that reason I will not attend their conference.”

In doing so he followed another Democratic candidate, Senator Elizabeth Warren, who was goaded into agreeing not attend by a BDS activist who stated, “I’m an American Jew and I’m terrified by the unholy alliance that AIPAC is forming with Islamophobes and antisemites and white nationalists and no Democrat should legitimize that kind of bigotry by attending their annual policy conference.”

For its part, AIPAC condemned Sanders, noting that he had never attended the conference and stating that with his “odious attack on a mainstream, bipartisan American political event, Senator Sanders is insulting his very own colleagues and the millions of Americans who stand with Israel.”

The implications of this public turn against AIPAC, an organization that has emphasized bipartisanship in support for Israel since its inception, are serious. One need not be an AIPAC member or even supporter to note this; indeed, some of the most severe criticism of AIPAC in recent years has come from the right, which has specifically condemned the organization’s strenuous efforts to include and work with Democrats as well as Republicans. It is also necessary to note that the “Deal of the Century” plan, which envisions Israeli territorial annexations, has put AIPAC to the left of the Trump Administration.

Unpacking Sanders’ statement reveals that he implicitly agrees with the idea that certain viewpoints and speakers are so unacceptable that they should not be given a platform. Formerly restricted to academia, this notion of “no platforming” became a mainstay of the British and now the American left. Political discourse is thus governed by the tastes and whims of those who are offended by the free exchange of ideas. In itself this represents a fundamental shift in American political behavior.

But it is the ideas themselves that AIPAC allows to be presented that Sanders has rejected. Sanders explicitly believes that AIPAC is a platform for “leaders who express bigotry,” namely Israeli PM Benjamin Netanyahu, and for representatives of the Israeli government, both of which Sanders has described as “right wing” and “racist.” Giving those viewpoints a platform is unacceptable, and AIPAC is therefore “right wing” and “racist” by extension. “Opposing Palestinian rights” is vague but appears to endorse Palestinian positions on the sanctity of the 1967 “borders” and perhaps even the “right of return.”

Sanders is preparing to identify, condemn, and perhaps boycott virtually any Israeli government to the right of Meretz, as all such governments will inevitably fail to meet his progressive standards. Beyond this, he is setting the stage for the Israeli society that elects either a Likud or Blue and White government to be labeled, cursed, and excluded. Other states and society will be not singled out in this way, except America itself.

More immediately, Sanders’s decision has domestic political implications for the Democratic Party, especially candidates for House and Senate races who will be pressured to fall in line with the presidential frontrunner. With a groundswell of BDS-supporting candidates emerging from Muslim and left wing communities, the consensus within the party will be, much as it is in the British Labour Party, to fall in line and vilify Israel. This will also have the effect of mobilizing immigrant communities.

Moreover, this litmus test will be applied to American Jews, long the most dependable supporters of the Democratic Party. The choice of party loyalty—a key element of American Jewish identity—or support for a country that has been labeled “right wing” and “racist” by Sanders will be difficult.

That choice—which effectively states that support for Israel as it exists is racism—in effect disenfranchises virtually all Orthodox and Conservative Jews, as well as most Evangelical Christians and Hindus, from the Democratic Party. The party itself is expected to chance this disenfranchisement in exchange for the certainty of support from American Muslims and progressives, the two groups that Sanders has reached out to most determinedly.

Whether the majority of American Jews will risk being labeled “right wing” and “racist” is unclear. While a great number of American Jews voted against Jimmy Carter in 1980 thanks to his hostility to Israel, the environment is so different today thanks to changing demographics and the information economy that it is difficult to predict voting behavior.

But should Sanders fail either to become the nominee or to be elected president in November, it is a virtual certainty that, in precisely the same manner of Jeremy Corbyn and the Labour Party, Israel and Jews will be blamed for his failure. Zionist conspiracies are a key element of progressive politics and will only expand as disloyalty to the party ideology and to its leader is rooted out.

Sanders’s instrumental use of his deracinated Jewish identity and anodyne support for Israel’s “right to exist” has shielded him and his antisemitic supporters like Linda Sarsour from the beginning. Whether it will continue to do so as the leadership of the party realizes they have been usurped, and as its media allies melt down into hysteria, is unknown.

What is clear, however, is that the equation of Zionism and Israel with “right wing” politics, “racism,” and its American variant “white supremacy,” has taken a huge leap forward with Sanders. Unless he can be stopped by his own party or by the reelection of Donald Trump, these concepts will become absolute fixtures on the American left. Combating these conceptions within American society as a whole, however, is a bipartisan task.